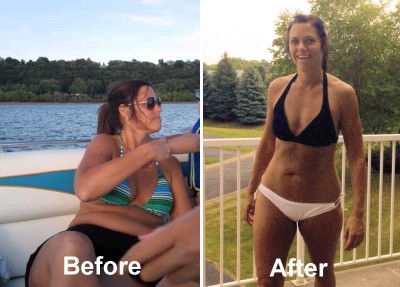 I started to watch what I ate and continued to run and bike. I had dropped a few pounds. But this had been 2 years of bad habits and lying to myself. It all started after I severely broke my ankle. I went from what I considered fit to not being able to even walk over night. The result from that put fear in my head to not pushing myself, which in turn made me lack in confidence and gain weight, but I never gave up or stopped trying.

I started a new job and quickly became friends with someone who had walked nearly my same path in life, I could relate to her and her to me. She was in my eyes in phenomenal shape. We shared the same weight loss/health goals and had the same energy. She talked of a gym she went to where every week she would come in sore to work. I wanted to be sore!! I had been working out but not anything that would make me sore. The gym was called Renegade Personal Fitness and training. I knew these guys from the past when I once worked out in a big gym. I had thought about them from time to time and wanted to reach out but was too embarrassed on where I was with my self and my weight gain…and not to mention then I would have to actually do something about it. My new friend and I had talked about me joining her for a workout, I had nothing to lose. So the time came, we did it. Yep I was now “sore” too and it felt amazing!! It took half a workout with Ryan to realize I would be hooked. Here was my chance to feel good again.

Ryan asked me to write some goals… No one had ever asked me to do that. I cried and was embarrassed when I actually had to read them out loud to him one on one in a meeting. Throughout this journey I didn’t always hit every goal but what I did do is KEEP GOING.

6 months later I pulled out my first set goals and guess what…I hit every one that I wanted to and am doing things I had never dreamed I would be doing. I flip tires, do handstands and just completed my first ever half marathon!! WOO HOO, I had done it. I am no longer fat, I AM FIT! I’m in better shape now than I was in my 20’s. I feel great and I am now down just under 50lbs. in 9 months. Believing in myself but mostly having someone else believe in me has changed my life. I have been given so many great tools to use and encouragement to face my fears I once had. Ok I cant lie even the small jump box scared me in the beginning. But Ryan was there to tell me to do it because he believed I could even when I didn’t. (Anyone who works out with him will tell you the same).

So many people just like me are/were overweight and don’t know where to start. You have to feel uncomfortable to get comfortable. Reach out to someone who can and will help you like Renegade Personal Fitness and Training. You just have to have the will and they will show you how.

Thank you Ryan and Renegade Personal Fitness and Training for taking this venture with me and making me feel confident, strong and beautiful again.